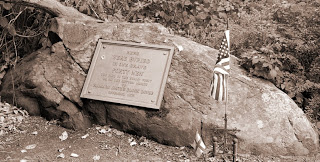 Over ” . . .  332 years ago (Dec 19, 1675), the most significant “battle” of what has been called the bloodiest (per capita) conflict in the history of America — the Great Swamp Fight — took place in a Rhode Island swamp, an attack by the colonial militia from the Plymouth, Connecticut, and Massachusetts Bay Colony killed about 300 Narragansett Indians (precise figures are unknown) on an island in the middle of Rhode Island’s Great Swamp.”

One of our ancestors, Major William Bradford, was a combatant in King Philip’s War. During the Great Swamp Fight, Great (10 times) Grand Father suffered a serious eye injury.

David Churbuck continues his description of the event:

“Led there by an Indian guide, the militia were able to reach the fort because an unusually cold late fall had frozen the swamp, making an assault possible.

The dead were mostly women and children. Those who fled into the swamp faced a long winter without food and shelter.

The irony of the assault was that the Narragansetts had been neutral in the King Philip War, staying out of the fight waged by Metacomet (King Philip) and the Wampanoag tribe. The Great Swamp Fight assured that neutrality would be forgotten, and the Narragansetts joined the terrible war.

Gerald Hyde, a state historian, wrote in 1938 on the occasion of a memorial marker being installed at the site:

“A fort in the Great Swamp had been built by the Narragansett Sachem, Canonchet, as a place of refuge. Because of its location on a small island of dry land in the midst of a great swamp, he no doubt considered it impregnable. It was, however, only partially completed and consisted of “pallisadoes stuck upright in a hedge of about a rod in thickness.” Two fallen trees formed natural bridges which were the only entrances and the principal one was guarded by a block house. Inside the fort the stores, harvests and accumulated wealth of the Narragansetts had been brought and there asylum had been offered the aged and infirm and the women and children of the Wampanoags of King Philip.

The United Colonies of New England declared war against the Narragansett Indians on November 2, 1675, charging them, among other things, with “relieving and succouring Wampanoag women and children and wounded men” and not delivering them to the English, and also because they “did in a very reproachful and blasphemous manner, triumph and rejoice” over the English defeat at Hadley. They voted to raise a thousand soldiers to be sent against the Narragansetts unless their sachems gave up the fugitive Wampanoags.

The forces of the United Colonies under Governor Winslow marched across Rhode Island and on December 14 attacked the village of the Squaw Sachem Matantuck near Wickford and burned 150 wigwams, killing seven Indians and taking nine prisoners. The Narragansetts then began a guerrilla warfare, sniping Colonial troops wherever occasion offered.

On the night of December 15 the Indians surrounded Jireh Bull’s large stone house on Tower Hill and massacred all but two of the occupants. The smoldering ruins of the house were found by English scouts the next day. It is possible that the Indians had learned of a plan for the Connecticut contingent to join the other forces at this house and had destroyed it in order to handicap the colonies. Three days later the two English forces joined at Pettaquamscutt and planned to attack the Indians the next day.

Ordinarily the swamp was practically impenetrable, as it is to this day, but due to the severe December weather the marshy ground had frozen and the English soldiers gained easy access to the island. The Indian outposts retreated into the fort where they were followed by the English. The terrible battle which then began took place amidst ice, snow, under brush and fallen trees.

At first repulsed, the English continued the assault, though with heavy losses. They contested almost every foot of ground until the Narragansetts, also suffering many casualties, were driven gradually from their fort into the swamp and woods.

Meanwhile, the English had set fire to the wigwams, some 600 in number, and flames swept through the crowded fort. The “shrieks and cries of the women and children, the yelling of the warriors, exhibited a most horrible and appalling scene, so that it greatly moved some of the soldiers. They were in much doubt and they afterwards seriously inquired whether burning their enemies alive could be consistent with humanity and the benevolent principle of the gospel,” says one early account.

The retreating Indians were driven from the woods about the fort, leaving the English a complete, though costly, victory. They had lost five captains and 20 men and had some 150 wounded that must be carried back to a house some ten miles distant. To the terrors of the battle and fire were added the bitter cold and blinding snow of a New England blizzard through which the English toiled back to Cocumcussa. The hardships of that march took a toll of 30 or 40 more lives. The Indians reported a loss of 40 fighting men and one sachem killed and some 300 old men, women and children burned alive in the wigwams.”  . . .