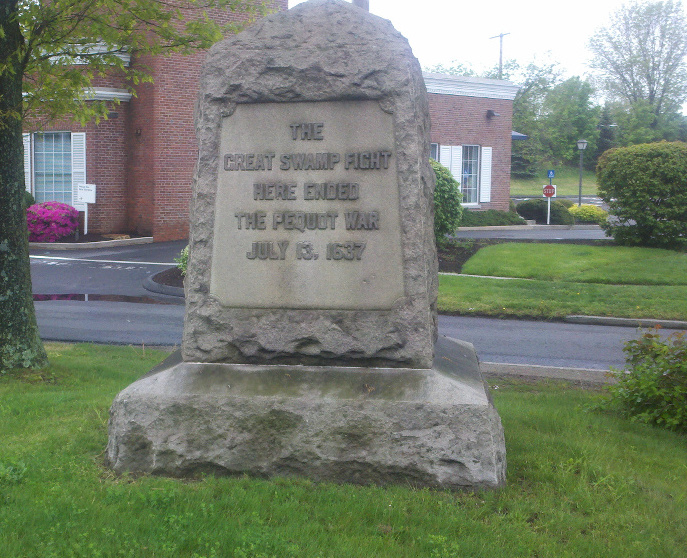 The family has ties in this country back to the Pilgrims. Many times, the family came up against Indians. In 1637, two family members — Sgt John Nott and Samuel Hale (Whose children Hannah Nott and John Hale would marry) volunteered to fight in one of the Indian wars.

Newcomb Jr. of Lebanon” land held in partnership with Simon Gager of Norwich, “one full Right in the Township granted to the officers and Soldiers & their Descendants that were in the fight called the falls fight above Deerfield in the year 1676.”

The web site: History is Elementary, by Lisa Cooper, described the Pequot War like this:

I wish more teachers would spend a little of time discussing the Pequot War since it is one of the first major interactions between colonists and Native Americans. While it is mentioned in many of today’s textbooks being used in lower middle grade classrooms the war is not generally covered at an adequate level and it is usually grouped with King Phillip’s War which occurred almost thirty years after the Pequot War.

Here are 13 facts regarding a horrific time in colonial history:

1. The main events surrounding the Pequot War occurred between 1637 and 1638. The parties involved were the Massachusetts Bay and Plymouth colonies along with Native Americans from the Naragansett and Monhegan tribes against the Pequot tribe. The Connecticut colony was also involved.

2. The homeland of the Pequot tribe was along the Thames and Mystic Rivers. Growing European settlement found the Pequot tribe basically surrounded by English and Dutch colonies. They weren’t very happy about it as you can well imagine.

3. Causes of the war stem from the murder of eight Europeans in 1634. John Stone has been described as a privateer, slaver, and smuggler. He and his crew were attacked near the mouth of the Connecticut River by the Western Niantic, a tribe connected to the Pequots. The reason for the attack was earlier Dutch traders had lured a member of the Niantic tribe aboard a Dutch vessel and then held him for ransom. When the Pequot paid the ransom they received a corpse in return. John Stone figures into the picture because he had been committing atrocities as well. He had a habit of kidnapping Western Niantic women and children and selling them into slavery to the Virginia Colony.

4. Even though John Stone had been banished from Boston due to malfeasance colonial officials were extremely upset at the murders and made demands to the Pequot that the Western Ninantic tribe members responsible for the killings should be turned over to them. The Pequot refused.

5. In 1636, another colonists, John Oldham, was attacked near Block Island. He and his entire crew were killed and the ship was looted. Some scholars debate that many of the New England colonists blamed tribe members from the Naragansett, however, John Oldham’s murder and the murder of his crew is touted as a beginning point for the Pequot War.

6. Within a month John Endicott, governor of the Massachusetts Bay Colony, sent a group of men on a revenge mission to Block Island. In the whole scheme of things it was a small fracus with 14 members of the Niantic tribe loosing their lives. The village was burned to the ground and crops that had been stored were either destroyed or taken by the colonists.

7. Endicott then traveled to a Pequot Village where the demand was made again for payment regarding Stone’s murder and Oldham’s murder as well. The demand resulted in many of the Pequot escaping through the woods and the loss of their village and crops to fire. Endicott and the other Massachusetts Bay colonists went home.

8. The Pequots turned their anger on the Connecticut colonist and began a seige on Fort Saybrook. By 1637, the Pequot began attacking colonial towns. Buildings and fields were destroyed, a few colonists were killed, and even two young female colonists were kidnapped, but were eventually returned via Dutch traders.

9. Finally, on May 20, 1637, Connecticut colonists attacked the Pequot at a village known as Misistuck or Mystic. Many of the men of the village were gone having traveled to Hartford on a raiding mission. When the colonists attacked Mystic it was mainly inhabited by Pequot women and children. It was a massacre with the colonial leaders using God as a justification for the killing. Approximately 600-700 natives were at Mystic during the attack. Only seven or so were taken prisoner. Only another seven or so escaped. The remaider died.

10. The actions of the colonists so horrifed members of the Narragansett and Mohegan tribes who were along on the raid that they returned home. That was the end of their participation. The idea of “total war” was foreign to Native Americans. They stated that the warfare waged by the English was too furious and too the number of deaths were too numerous (from William Bradford’s Of Plimoth Plantation, 1620-1647).

11. From that point on the Pequot were hunted down, taken prisoner or killed systematically.

12. On September 21, 1638 the Treaty of Hartford was signed. Pequots who had survived were distributed to the Naragansett, Mohegan, and Metoac tribes as slaves, or shipped by colonist to Bermuda where they were sold into slavery. Some became household slaves belonging to colonists in Massachusetts Bay or Connecticut. Colonists declared the Pequot extinct and took their lands. They even outlawed the word “Pequot”.

13. The strong show of force by New England colonists assured peace for the next several years. As noted historian Alden T. Vaughan wrote in his book New England Frontier: Puritans and Indians 1620-1675:

“The effect of the Pequot War was profound. Overnight the balance of power had shifted from the populous but unorganized natives to the English colonies. Henceforth [until King Philip’s War] there was no combination of Indian tribes that could seriously threaten the English. The destruction of the Pequots cleared away the only major obstacle to Puritan expansion. And the thoroughness of that destruction made a deep impression on the other tribes.”

While many historians still argue over who was at the most at fault and over the number of Native Americans that were actually killed primary sources such as Captain John Mason’s account or the account of John Underhill are useful reads.