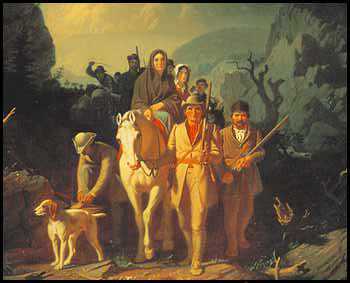 Perhaps the most interesting of Leonard and Barbara Holstein‘s children was Michael. He left Pennsylvania when about sixteen and became a noted frontiersman and associate of Daniel Boone in the western territories of the Virginia and North Carolina colonies. That region later became Tennessee and Kentucky.

After an episode in which he shot an Indian stealing apples, he changed his name to Michael Stoner, a derivative of Holstoner, one of the spellings of the family name. At one time, he supposedly was the only white man in what is now Kentucky and on one occasion reportedly covered about 1000 miles without seeing another person of his own race.

Frequent references to Stoner are found in the books Tennessee and Seedtime On The Cumberland, particularly the latter, the following selected quotes from these books provide a glimpse of this pioneering woodsman, hunter and Indian fighter.

“By 1766, the Cumberland Valley, as well as East Tennessee, was being explored by James Harrod, Michael Stoner and Uriah Stone.” (Harrod later established Harrodsburg, the first permanent white settlement in Kentucky. Stone gave his name to the Stone’s River in Middle Tennessee) Following the initial explorations. a few long hunters pushed on westward: “One of these was big Michael Stoner who had visited Middle Tennessee as early as 1767 and taken up land near the mouth of the Stone’s River. He had spent much time in that country, and the year before had gone on a long journey with Daniel Boone to warn the surveyors in Tennessee and Kentucky that (the Indian) Cornstalk had taken to the warpath. Now, he and Boone were going away again into Kentucky, and where there was no existing trail, blaze one, to the settlement they would make, soon to be known as Boonesborough.” (Boone grew up in the same Millbach, Pennsylvania community as Stoner)

Stoner’s superlative skills with the rifle, as compared to others, are cited as follows: “Dieverbaugh may have been one of the best marksmen, but there was a better one than he. This was Michael Stoner, later famous as a scout with Boone and defender of Boonesborough. He was a large man, speaking with a strong German accent, an indifferent hand at target practice, but against Indians or game held to be the best shot in Kentucky.”

Whereas Stoner preferred being in the woods to being with people, Daniel Boone was a sometimes flamboyant personality who enjoyed telling of the places he had been and the adventures experienced. “Michael Stoner was a better marksman, and practically all hunters had more luck than Boone, but Boone talked his way into immortality. Men believed him; and one who heard him talk of the beautiful land on the Cumberland was James Robertson. “Boone’s accounts undoubtedly created the interest which led Robertson and John Donelson to bring two groups of settlers to establish the first permanent community in Middle Tennessee. They traveled separate routes from East Tennessee and met at the Big Salt Lick where Fort Nashborough, later Nashville, would be built.

“The Donelsons went eight more miles up to the mouth of Stone’s River. Here, on the land Michael Stoner had claimed and later improved, the Donelsons went into temporary quarters of open-faced camps. They left a few months later when the Indians began giving trouble”, ultimately to loeate in Kentucky. (One of the Donelson party was thirteen-year-old Rachel Donelson, who one day would marry Andrew Jackson, a man that later became the seventh President of the United States.)

“When the organized settlement of the Cumberland Valley began in 1779, a few scattered settlers were already living in that region. Some were temporary residents such as Timothy Demonbreun who spent a portion of each winter there; but some of the longhunters, such as Kasper Mansker and Michael Stoner, were returning to become permanent settlers. “There is no record of all first settlers in Middle Tennessee; possibly the closest thing is a list of 263 signatures affixed to a paper drawn up in 1780, and known as the Cumberland Compact (which set up the first governing body in the region). This includes many such as Samuel Newell and Michael Stoner, known to eventually have settled elsewhere.”

Stoner and the other longhunters led an arduous life which required a great deal of stamina, courage and innovation to survive. Their hunting forays often kept them in the forests for more than a year. The, often went in parties but Stoner apparently preferred to go alone. They usually took a horse or two, rifle, gunpowder, lead for bullets, tools for making bullets and repairing guns, tow, bullet patches, hand axe, knives, skillet and, sometimes, traps for otter or beaver. On the outward journey, they might take a supply of corn meal salt and rum — and always, corn for the horses if grazing was insufficient. But the principal food staple was meat from the kill and whatever fruit, nuts, greens or berries could be found.

Typical clothing for the frontiersman was a small-crowned floppy hat, a shirt of coarse linen or hemp, waistcoats of homespun or tanned hides, leather breeches, leggings of leather of coarse woolen cloth halfway up the thigh and moccasins. Most also would have a many-pocketed homespun greatcoat, probably with hand carved horn buttons. The most laborious task for the hunter was dressing the kill, preparing the skins for market and transporting them there. They slept on the ground, in a cave or, if they planned to stay in one location for a while, an “open-faced camp” would be erected. This was a small lean-to of poles covered by puncheons or hides, with walls on only three sides. The open front was always higher than the back so the rain would not drip into the camp fire, which was close enough for the occupants to sleep under shelter but keep their feet warm facing the fire on the open side. The principal river in upper east Tennessee was named for a member of Michael Stoner’s family: “The Holston River was so called because Stephen Holston had settled there some time before 1741. The names for the Holston River and Michael Stoner were drawn from the same original family name — Holsteiner, sometimes spelled Holstoner.” (Stephen Holston is believed to be an uncle of Michael Stoner).

In addition to facing the ever-present hazards of the wilderness and fighting the Indians, Stoner also fought in the Revolutionary’ War — with John Sevier in the Battle of King’s Mountain and George Rogers Clark at the Battle of Vincennes. Sevier later became the first Governor of Tennessee.

(I’m looking hard to find the original source of this.)